I’ve already mentioned APRS on this blog, it will mainly be useful for radio amateurs but can be interesting to RTL-SDR listeners too.

The application is built around LevelDB and geo hashing as mentioned in this post blog, it’s a lot faster than using SQLite especially on iOS, SatSat is still using the SQLite cities lookup and you can compare it’s terribly slow.
It receives weather data & APRS data from APRS-IS connections, then decodes and stores the packets into LevelDB for indexation.

MyAPRS has some extra features over other applications, like transceiver models detection, so it can highlight all C4FM/Fusion users in your area.
It receives the latest 10mn packets for your area, helped by a small Golang API.

The first release is simple but works very well to discover repeaters and amateurs around you or a region you plan to visit, I’ll add position sharing later: due to the way APRS-IS works it’s the responsability of the developer to provide passwords & check for the amateur license of the users (even if the algorithm is known publicly…).

I plan to make it work with some bluetooth modems starting with the one I’ve worked on to be used completely off the grid, so we can have a cheap and powerful APRS application, with a real keyboard (try to answer a message with a Yaesu…).

I had to put some ads in it, a lot of people have asked for a paid SatSat version to get rid of the ads but that’s the only way I can maintain these apps, so I’m experimenting with ads for now.

It was a fun project to develop for, I hope you will find a use for it. 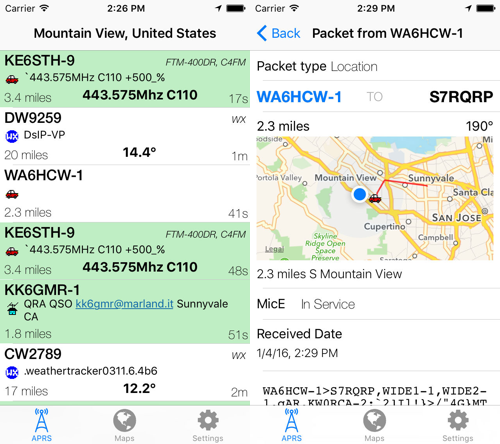