Six months ago, I wrote on this blog about Geohashes and LevelDB with Go, to create a fast geo database.
This post is very similar as it works the same way but replacing GeoHashes with Google S2 library for better performances.

There is an S2 Golang implementation maintened by Google not as complete as the C++ one but close.

For the storage this post will stay agnostic to avoid any troll, but it applies to any Key Value storages: LevelDB/RocksDB, LMDB, Redis…
I personnaly use BoltDB and gtreap for my experimentations.

This post will focus on Go usage but can be applied to any languages.

Or skip to the images below for visual explanations.

Geohash is a great solution to perform geo coordinates queries but the way it works can sometimes be an issue with your data.

The main advantage is the region coverer algorithm, give it a region and the maximum number of cells you want, S2 will return some cells at different levels that cover the region you asked for, remember one cell corresponds to a range lookup you’ll have to perform in your database.

The coverage is more accurate it means less read from the DB, less objects unmarshalling…

We want to query for objects inside Paris city limits using a rectangle: 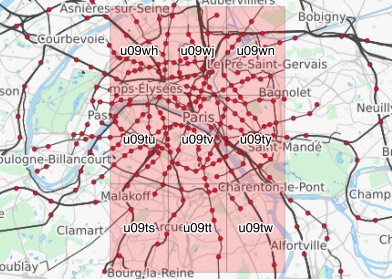 Using level 5 we can’t fit the left part of the city.
We could add 3 cells (12 total DB queries ) on the left but most algorithms will zoom out to level 4. 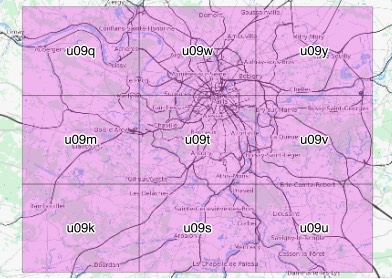 But now we are querying for the whole region. 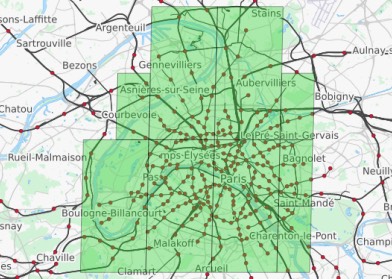 Using s2 asking for 9 cells using a rectangle around the city limits. 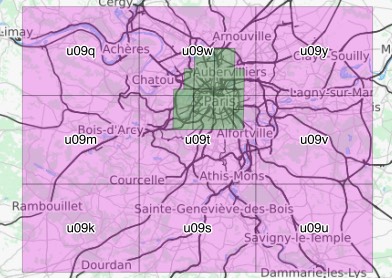 The zones queried by Geohash in pink and S2 in green.

Let’s say we want to store every cities in the world and perform a lookup to find the closest cities around, first we need to compute the CellId for each cities.

Big endian is needed to order bytes lexicographically, so we can seek later from one cell to the next closest cell on the Hilbert curve.

Now we can store key as the key and a value (a string or msgpack/protobuf) for our city, in the database.

For the lookup we use the opposite procedure, first looking for one CellID.

Then compute the CellIDs for the region we want to cover.

RegionCoverer will return at most 8 cells (in this case 7 cells: 4 8, 1 7, 1 9, 1 10) that is guaranteed to cover the given region, it means we may have to exclude cities that were NOT in our rect, with func (Rect) ContainsLatLng(LatLng).

Congrats we have a working geo db.

S2 can do more with complex shapes like Polygons and includes a lot of tools to compute distances, areas, intersections between shapes…